Tickets are on sale now for the 2018 Evening of Respect at the Apollo Theater in New York City! 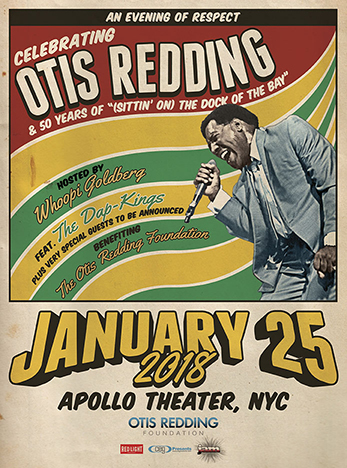 The 2018 Evening of Respect will be Thursday, January 25, 2018 at the legendary Apollo Theater in New York City! This year marks the 50th anniversary of Otis’ seminal hit “(Sittin’ On) The Dock of the Bay” and the stars are coming out to celebrate. Whoopi Goldberg hosts. She will be joined by the Dap Kings as the house band. Otis’ sons Otis Redding III and Dexter Redding, Empire’s Jussie Smollett, Steve Cropper, Paul Janeway of St. Paul and the Broken Bones, and The Preservation Hall Jazz Band will all perform, with more to be announced!

Tickets are on sale now and proceeds benefit the Otis Redding Foundation! Buy yours here.