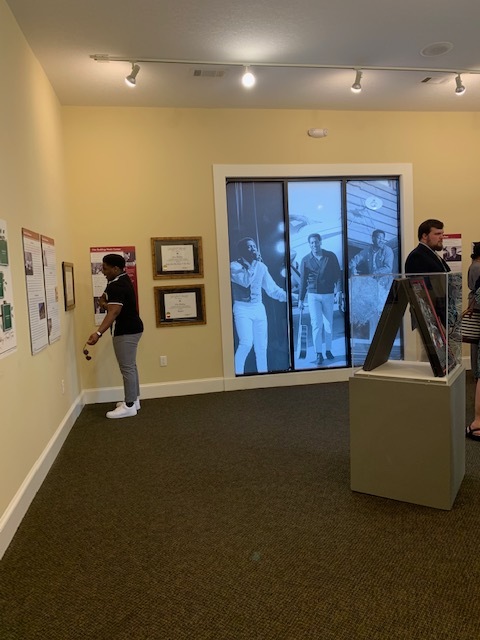 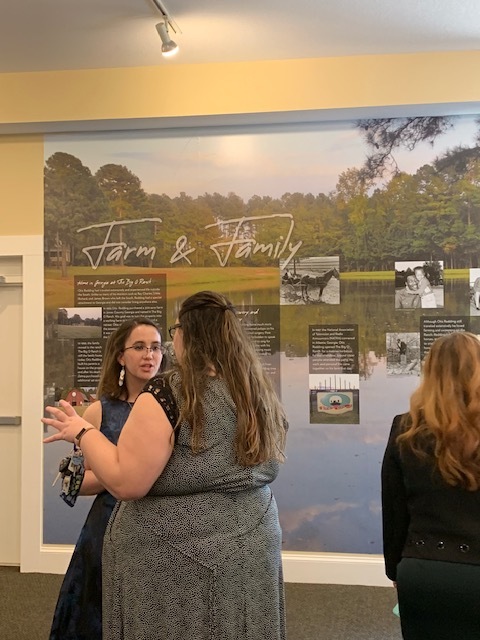 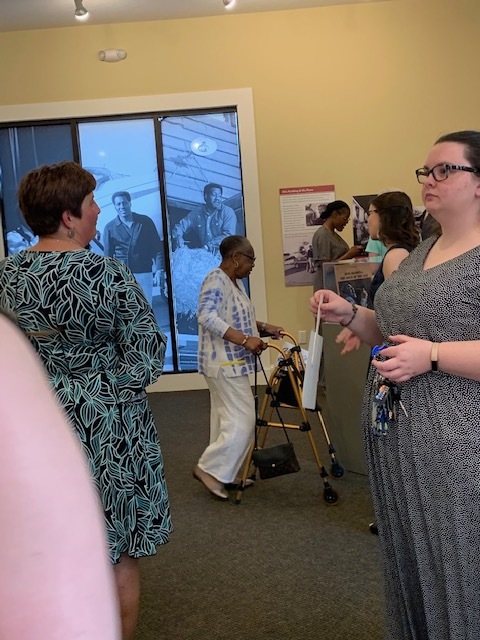 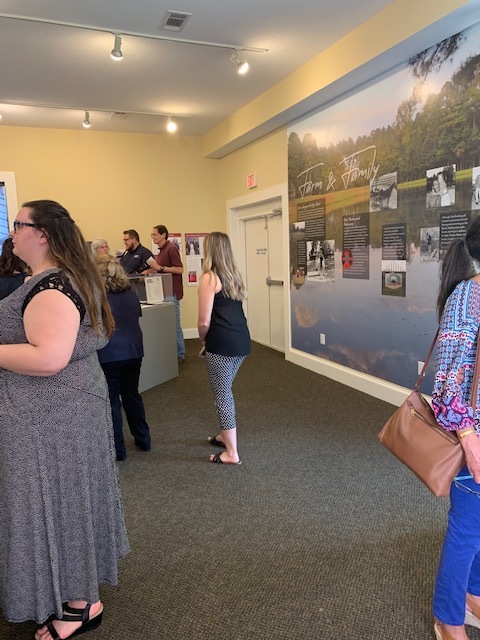 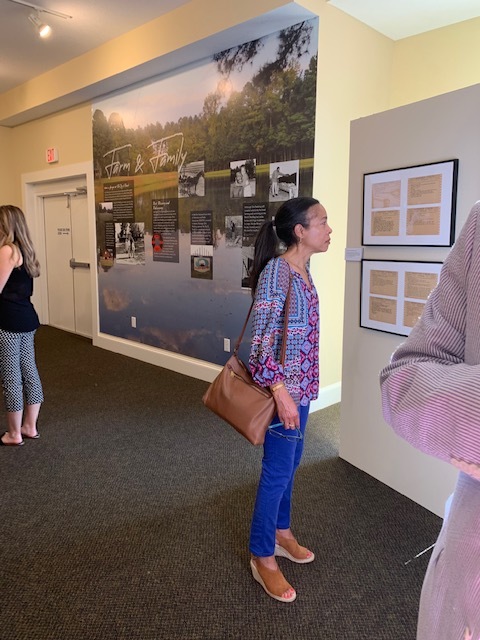 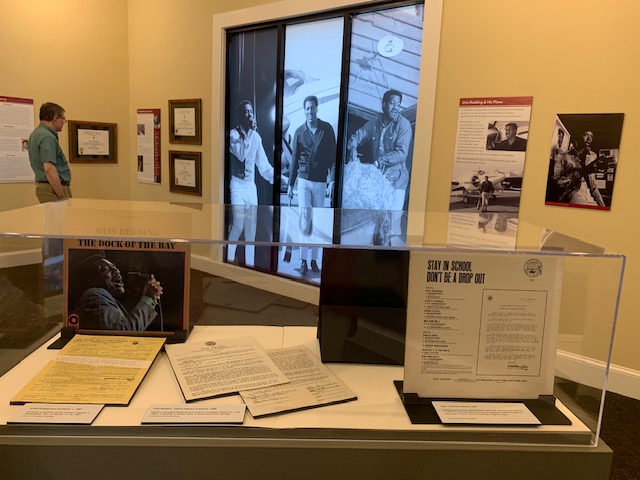 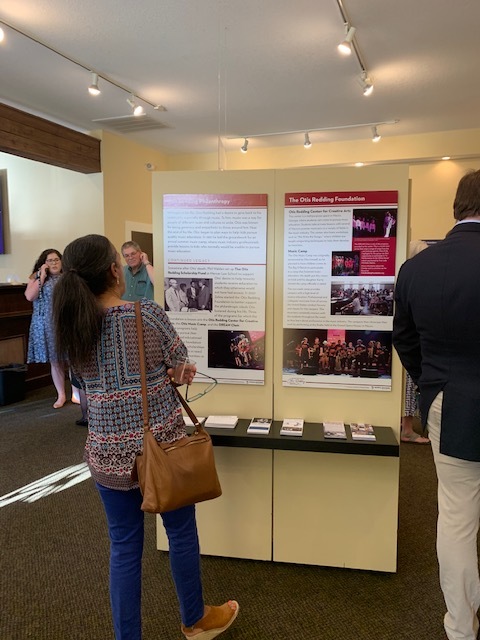 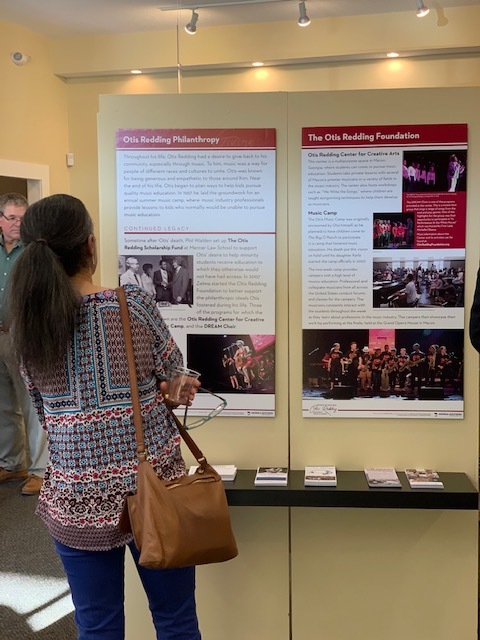 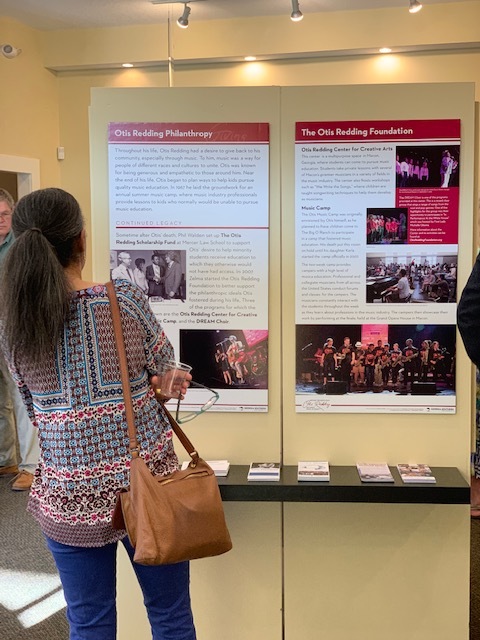 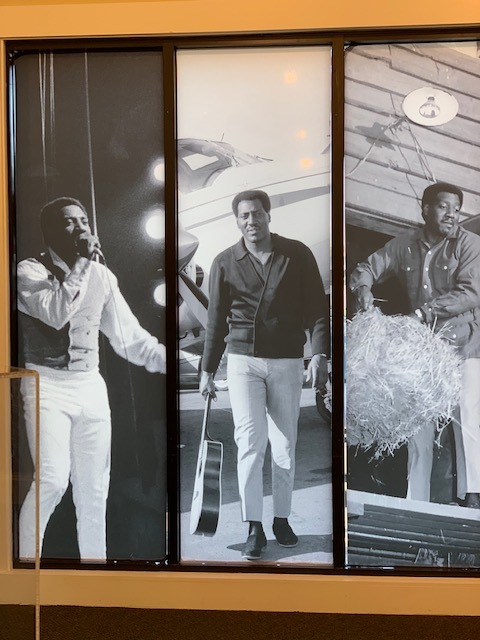 Otis Redding has had a connection to Statesboro and Georgia Southern University for more than 50 years. He performed on campus in 1965, his daughter attended Georgia Southern, and his grandson is a current student. Another chapter of the connection between Redding, the University and Statesboro will begin with the new exhibit, “Beyond the Spotlight: Otis Redding His Family, Music, and Legacy,” at the Museum on Main inside the Statesboro Convention and Visitors Bureau (SCVB). The opening reception will be held at 5:30 p.m. on May 6.

Georgia Southern museum studies students helped to curate the exhibit, along with members of the Otis Redding Foundation, including Redding’s daughter, Karla Redding-Andrews. Redding-Andrews said she and Georgia Southern Museum Director Brent Tharp, Ph.D., have been working together for more than two years to create an exhibit in homage of her father and his connection to Georgia Southern and the state of Georgia.

“I spent many hours working with the museum studies students from Georgia Southern’s College of Arts and Humanities who put this exhibit together,” Redding-Andrews said. “We discussed the life and works of Otis Redding, what his name means today and how the family carries on his focus on education in his name.”

The exhibit is a part of a project for the introduction to museum studies course taught by Tharp as an adjunct professor in the Department of History. It provides students an avenue for learning outside the classroom where they can see the inner workings of a museum firsthand.

“It has been a joy to help create an exhibit to celebrate the life of Otis and the foundation’s work of keeping his ideals alive,” said Michael Elmore, a history student who worked on the exhibit.

The students worked closely with Otis’ wife, Zelma Redding, Redding-Andrews and the Otis Redding Foundation to get the pieces for the exhibit.

“My mother Zelma and I handpicked the artifacts that are on loan for the exhibit and collaborated closely on the images and language used,” Redding-Andrews said. “It’s so wonderful to see the legacy of Otis Redding living on in Georgia, and having younger generations discover him and provide more ways for others to discover him.”

Photos of The Big O Ranch, where Otis lived and is buried today, is featured in the exhibit, along with other artifacts including Otis’ triple platinum record for “(Sittin’ on) the Dock of the Bay,” his gold record for “Try a Little Tenderness,” a commemorative lighter distributed at Otis’ funeral, his famous red silk suit worn for the Live in Europe concert, his touring bandstand, and numerous other artifacts.

Becky Davis, Executive Director of the SCVB, said the exhibit will help the SCVB garner more interest in the Museum on Main and Statesboro in general.

“This is a unique partnership that directly impacts the number of visitors to our center every year,” Davis said. “This will be our fifth year working with Dr. Tharp and his class, and I’m always impressed by his students and their final product.”

The Museum on Main usually houses an exhibit that will provide context around the culture of the area. Past exhibits included geography, mapping and slavery on the Georgia coast. Tharp said the focus of the exhibits combined with the need to work with a collection of artifacts made for a great opportunity to work with the Otis Redding Foundation.

“Unlike a lot of his mentors and colleagues who grew up in the south, Otis Redding didn’t move out of Georgia,” Tharp said. “He was committed to living here and ended up buying the Big O Ranch, where he perpetuated a connection to Georgia. It’s a great way to look at the culture and musical heritage of this area through the lens of someone dedicated to Georgia.”

While the exhibit will feature a lot of information and artifacts involving Otis’ musical legacy, it will also look at other aspects of his life.

“We wanted to look more at the personal side of him and the legacy he left through his foundation, which still affects Georgia and this area today,” Tharp said.

Tharp said Otis’ wife, Zelma, will also be featured in the exhibit.

“We look at Zelma’s important impact,” Tharp said. “Otis unfortunately died really young, so Zelma had to take over the business and later the foundation to continue his legacy. She learned a lot about the music industry, while still taking care of the family.”

Redding-Andrews said she is proud to have her father recognized by Georgia Southern because of her many connections to the university.

“This was where I went to school and had some amazing years, and I continue to remain active at GSU,” Redding-Andrews said. “I always hold my years at Georgia Southern high in my heart. It’s where I met my husband, some of my closest friends and of course, got a great education. I’m so proud of my son, Jarred, for choosing to attend GSU as well. For this institution to recognize my family, it means a lot.”

The Museum on Main is a part of an annual cooperative project between the SCVB, the Georgia Southern Museum and the Department of History. The Otis Redding exhibit will run through April 17, 2020.